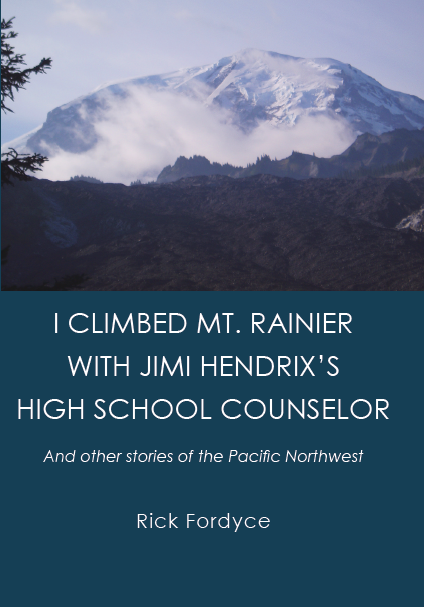 Seattle’s love affair with all things Jimi Hendrix continues unabated. Hendrix’s 70th birthday is coming up (Nov. 27, 1942), and the EMP Museum is on it.

From the “you never know what might bubble up” department comes a self-published book by North Seattle and Cape Cod resident Rick Fordyce: “ I Climbed Mount Rainier with Jimi Hendrix’s High School Counselor And Other Stories of the Pacific Northwest.” According to biographical information on the Web, Fordyce taught high school math and English in Africa in the late 1970s and is the author of a novel. As Fordyce and his instructors and fellow novices summit the mountain, the subject of Hendrix comes up. “I actually convinced him to drop out,” Hendrix’s former counselor tells Fordyce. “Not exactly what you’d expect from a counselor.”

It’s a surreal conversation on the mountain, to be sure. And then the subject is dropped. The rest of the stories, in the Hemingway-Carver-esque mode, captures the underlying angst of modern life, even in our beautiful, far corner. Still, that brief, high-altitude conversation nags: You may never look at Mount Rainier the same way again. There’s nowhere Jimi Hendrix doesn’t go."

"You have to love the title of Chatham resident Rick Fordyce's second book (after "Glen"). A native of Seattle, Fordyce, who has been on the Cape for over 20 years, actually did climb Mt. Rainier during a weekend climbing seminar and one of the other participants was Jimi Hendrix's high school counselor. Beyond that, it's all about Fordyce's storytelling talent, which is considerable. He's currently at work on "On the Wide African Plain — and Other Stories of Africa." - The Cape Cod Times, Sept. 23, 2012 Melanie Lauwers

Review of Rick Fordyce's (Ghana 1978-80) I Climbed Mt. Rainier with Jimi Hendrix's High School Counselor, and Other Stories of the Pacific Northwest

If you grew up in Seattle in the ’60s or ’70s, you’ll appreciate this little book. You might even understand some of the teenage jargon. Groovy! Cool!

There are twelve stories here, about adolescents in the city trying hard not to get busted for pot; about camping out in the North Cascades with a bunch of friends trying hard to like it; about making friends and comparing notes about urban high school life; about flying off to Europe with other teenagers, smoking cigarettes in flight (before the ban), and kissing the girl sitting next to, though you’d only just met; and, among others, the title story about climbing Mt. Rainier with the guy who was Jimi Hendrix’s high school counselor (how cool was that!) in the days when climbing the peak cost a measly thirty dollars, all equipment included.

The Mt. Rainier story is one of the best. But I also liked the one about the kids flying off to Europe for the summer. Fordyce is a good story teller, so for a bit of the flavor of his style, here’s a well-crafted and memorable (perhaps even familiar) little scene. Remember the daze?

Michelle . . . turned slightly and leaned again into Kevin. The seats were very close together and the backs were tall so it seemed like being in a private little living room. They had already kissed a few times earlier, not long after the dinner trays had been carted off and people were turning off lights. Kissing is what you did when you were nineteen, or seventeen or sixteen, and you were seated in a private little living room with someone of the opposite sex. This seemed especially appropriate if you were flying on a jet for the first time headed for London, with no parents around. At their age, in the summer of 1971, kissing is something everyone did at every opportunity, religiously, the thought of not for any length of time — two days, a week — as dreadful as acne or a bad haircut.

Michelle turned and they kissed again. She was pretty cute. Kevin put his arm around her and she nestled in. They finished their cigarettes and soon fell asleep. They had known each other for about two and a half hours.

As a fellow writer, I can’t resist making a few observations about Fordyce’s style. First, I like it. He knows how to spin a yarn. Second, he’s good with dialogue. It’s brash and sounds like pubescent teenagers talking, shouting their rage over their raging hormones. Third, he knows his subject matter. But how does he remember all that? Are his these stories truly fictional? Despite the standard caveat inside the title page that tells me this is a work of fiction and that “Any resemblance to actual events or locales or persons, living or dead, is entirely coincidental,” you could fool me, cuz it sounds a bit autobiographical. But then, writers often write best about what they know best. And Fordyce obviously knows.

I only caught one tiny flaw, a miniscule and inconsequential misspelling. In the Mt. Rainier story he compares one steep chute on the climb to “Everest’s Hilary Step” . . . except that Hilary is missing an ‘el’, as in Sir Edmund Hillary (whose last name is spelled exactly the same as the firsts name of the lady who just might become our next president). But, then, kids nowadays can’t spell anyway, can they?

Fordyce is a good story teller in print and I imagine orally at a party, too. And since I live just down Interstate-5 a few hours’ drive south of Seattle, perhaps if we ever meet up I ask him to tell me the Mt. Rainier story aloud. It’s a gas.

Thank you again for bringing your book in the other day.  I've been able to read through it and find it unique and interesting.  I'm happy to have it on our shelves.  Instead of putting it in the local author section, where I think it would get lost because of its size, I'm going to put it in Outdoor.  I'd also like to buy 2 more to make it stand out a bit. Thank you." Janis Segress/Head Buyer Eagle Harbor Book Company