I Climbed Mt. Rainier With Jimi Hendrix's High School Counselor and Other Stories of the Pacific Northwest 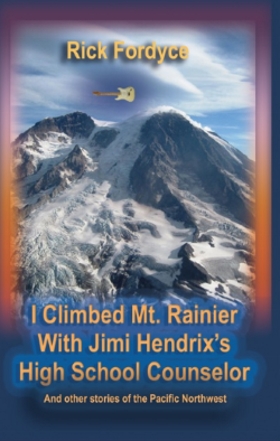 Name: I Climbed Mt. Rainier with Jimi Hendrix's High School Counselor and Other Stories of the Pacific Northwest

OR:  Order through Amazon.

OR:  Purchase a Signed Book From Rick.

Seattle’s love affair with all things Jimi Hendrix continues unabated. Hendrix’s 70th birthday is coming up (Nov. 27, 1942), and the EMP Museum is on it

From the “you never know what might bubble up” department comes a self-published book by North Seattle and Cape Cod resident Rick Fordyce: “ I Climbed Mount Rainier with Jimi Hendrix’s High School Counselor And Other Stories of the Pacific Northwest.” According to biographical information on the Web, Fordyce taught high school math and English in Africa in the late 1970s and is the author of a novel. As Fordyce and his instructors and fellow novices summit the mountain, the subject of Hendrix comes up. “I actually convinced him to drop out,” Hendrix’s former counselor tells Fordyce. “Not exactly what you’d expect from a counselor.”

It’s a surreal conversation on the mountain, to be sure. And then the subject is dropped. The rest of the stories, in the Hemingway-Carver-esque mode, captures the underlying angst of modern life, even in our beautiful, far corner. Still, that brief, high-altitude conversation nags: You may never look at Mount Rainier the same way again. There’s nowhere Jimi Hendrix doesn’t go."

Thank you again for bringing your book in the other day. I've been able to read through it and find it unique and interesting. I'm happy to have it on our shelves. Instead of putting it in the local author section, where I think it would get lost because of its size, I'm going to put it in Outdoor. I'd also like to buy 2 more to make it stand out a bit. Thank you." Janis Segress/Head Buyer Eagle Harbor Book Company

"You have to love the title of Chatham resident Rick Fordyce's second book (after "Glen"). A native of Seattle, Fordyce, who has been on the Cape for over 20 years, actually did climb Mt. Rainier during a weekend climbing seminar and one of the other participants was Jimi Hendrix's high school counselor. Beyond that, it's all about Fordyce's storytelling talent, which is considerable. He's currently at work on "On the Wide African Plain — and Other Stories of Africa." - The Cape Cod Times, Sept. 23, 2012 Melanie Lauwers

Coming Soon: On the Wide African Plain- And other stories of Africa